Week 629; Signs And The Great Pumpkin 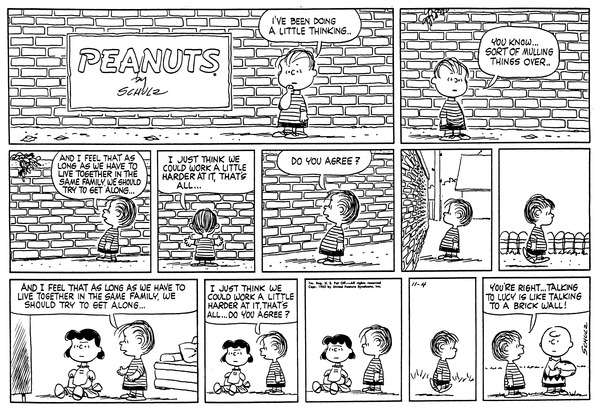 Chuck talks to Lins about how talking to Luucy is like talking to a brick wall and he tests it out and it is exactly the same.

Schroeder puts signs saying that there are 41 days until Beethoven's Birthday but then Snoopy put up signs asking if people knew that.
580

Sallicia's daughter informs Lins' son that she'll not speak to him on the street, in the ocean, in the air, or on the moon and he asks what would happen if he was coming through the rye.
71

Sallicia's daughter revokes her not talking to Lins' son after hearing him say his life is ruined to be happy about it.
72

Schroeder puts up signs that tell that Beethoven's birthday will be on a Sunday but Snoopy adds one saying that it's thrilling news.
581

Snoop looks into his house during the rain but gets annoyed that every single time it's rain the basement is flooded.

The Snoopy Scavengers are shaken by a large crew of trucks passing by the Doghouse fleet because they need to ship all the materials needed for the 67 freeway.